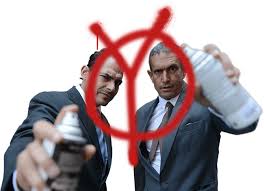 Trolling For Justice, with Mike Bonanno of The Yes Men

If you enjoy this episode, consider becoming a patron and getting involved with the show. Check out our Patreon campaign: support us and get all kinds of fantastic benefits!

In this episode we meet Mike Bonanno, aka Igor Vamos, one half of the dynamic, culture jamming activist duo The Yes Men. To date, they’ve produced three films: The Yes Men (2003), The Yes Men Fix the World (2009) and The Yes Men Are Revolting (2014). In these films, they impersonate entities that they dislike, a practice that they call “identity correction”. In reality The Yes Men are maybe the original mass media trolls,  having successfully flummoxed the BBC, Chamber of Commerce, and even George W. Bush. But it’s trickery for good causes, from raising awareness around the Bhopals disaster to global warming.

After a news roundup from Jamie (AT&T/Time Warner merger, Pirate Party showing in Iceland elections, and copyright lobbies going after core Internet infrastructure) the episode explores the increasing power of media activists and the capacity figures like Julian Assange and Edward Snowden have to affect the political stage. It’s a  bumper episode of STEAL THIS SHOW, weighing in at about 1hr 15mins. Some fun topics: