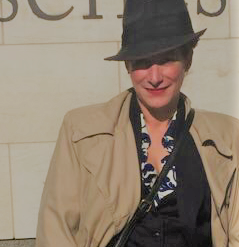 ‘Learning To Love Your Panopticon’, with Diani Barreto of ExposeFacts

In this episode we meet Diani Barreto from the Berlin Bureau of ExposeFacs. Launched in June 2014, ExposeFacts.org supports and encourages whistleblowers to disclose information that citizens need to make truly informed decisions in a democracy, aiming to shed light on concealed activities that are relevant to human rights, corporate malfeasance, the environment, civil liberties and war.

We start by discussing Diani’s Cuban heritage, the recent mysterious aural attacks against diplomats in Cuba, and how her work with Telecomix trying to network the country attracted the unwelcome attention of the American Heritage Foundation. Then we move through a range of topics including whether the media establishment has lost the power determine what counts as ‘reality’ in political discussion; Facebook’s political function and whether it’s more like a branch of government than a company; how the new information incumbents like Facebook, Twitter and Wikileaks are coping with their status; and if Silicon Valley’s mantra of “disrupt all the things” is actually resetting our social landscape in favour of the unpleasant and unwanted alt-right.